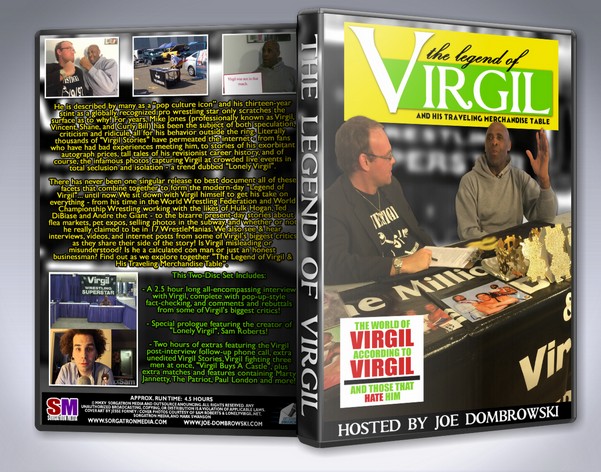 “The Legend of Virgil & His Traveling Merchandise Table” on DVD & Digital!

He is described by many as a “pop culture icon” and his thirteen-year stint as a globally recognized pro wrestling star only scratches the surface as to why! For years, Mike Jones (professionally known as Virgil, Vincent, Shane, and Curly Bill) has been the subject of both speculation, criticism and ridicule, all for his behavior outside the ring. Literally thousands of “Virgil Stories” have permeated the internet – from fans who have had bad experiences meeting him, to stories of his exorbitant autograph prices, tall tales of his revisionist career history, and of course, the infamous photos capturing Virgil at crowded live events in total seclusion and isolation – a trend dubbed “Lonely Virgil”.

There has never been one singular release to best document all of these facets that combine together to form the modern-day “Legend of Virgil”… until now. We sit down with Virgil himself to get his take on everything – from his time in the World Wrestling Federation and World Championship Wrestling working with the likes of Hulk Hogan, Ted DiBiase and Andre the Giant – to the bizarre present-day stories about flea markets, pet expos, selling photos in the subway, and whether or not he was really in 17 WrestleManias. We also hear interviews, videos, and internet posts from some of Virgil’s biggest critics as they share their side of the story! Is Virgil misleading or misunderstood? Is he a calculated con man or just an honest businessman? Find out as we explore together “The Legend of Virgil & His Traveling Merchandise Table:.

– A 2.5 hour long all-encompassing interview with Virgil, complete with pop-up-style fact-checking, and comments and rebuttals from some of Virgil’s biggest critics!