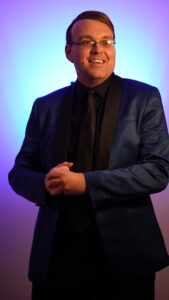 Joe Dombrowski always knew he wanted to be involved in professional wrestling, but the what, when, and the how was always pretty unclear. That desire intensified on July 20, 2002, at age 16, after seeing a live International Wrestling Cartel event for the first time, headlined by Jerry “The King” Lawler vs. Kamala The Ugandan Giant. After several months of following the promotion, a chance to get involved first-hand approached when the high school he attended was in need of a fundraiser.

After several weeks of helping locally promote the event, Joe’s official debut in pro wrestling occurred on January 25, 2003 in his hometown of Bellevue, Pennsylvania (a card headlined by CM Punk). Dombrowski served as color commentator for the evening, alongside veteran play-by-play voice Jeff Gorman. While the performance was nothing to write home about, it got Joe’s feet in the door, and in February he was asked to begin writing event results & feature columns for IWCwrestling.com. As he grew into the writing role, Joe didn’t lose sight of his desire to return to a position behind a microphone. After a few more try-outs, Joe finally had a big opportunity in August 2003 – the chance to fill in for Gorman as play-by-play man, and call his first entire show, start-to-finish, in August 2003. After that night, Dombrowski’s spot as a professional wrestling announcer became official.

Over the next few years, Joe regularly worked alongside Gorman and Anthony Kingdom James (who debuted as Joe’s color commentator at that August 2003 event), and also began expanding to other promotions throughout Western Pennsylvania and Northeast Ohio. But in 2005, a golden opportunity came along when, through a chance encounter, Joe began speaking to the management of a company determined to change the face of wrestling… in the United Kingdom.

Joe served as a commentator, ring announcer, and (for the first time in his career) assisted in a front office capacity in the now-infamous 1PW (One Pro Wrestling) promotion in Doncaster, England. With a star-studded roster, including many of the rising stars in TNA & ROH at the time, along with legends like Bret Hart, Jeff Jarrett, and Lance Storm, 1PW routinely played host to sell-out crowds and exciting dream matches.  After an extended stretch of financial mismanagement by the company’s ownership, 1PW parted ways with Dombrowski as a cost-cutting measure in the summer of 2006, and went bankrupt six months thereafter, sparking a long stretch of controversial business practices, changes in ownership, re-starts and shut-downs, but Joe had his next project to tackle already waiting back in America.

In the beginning of 2006, Joe began working for the late-JT Lightning’s Cleveland All-Pro Wrestling organization. The timing couldn’t have been better. Weeks after starting with the promotion, it was announced that CAPW would begin a one-hour weekly television show on the upstart regional sports network SportsTime Ohio, available in over 4 million cable homes throughout Ohio and available nationwide via premium satellite sports packages. The show had a 13-month run, until business & creative differences divided much of the key players in the company. As a result, a new company was formed to take over the television time-slot, one starting from scratch that needed all the help it could get.

PWO (Pro Wrestling Ohio) began in the fall of 2007, and was Dombrowski’s first opportunity to truly take the reigns of a wrestling promotion. At first working creatively under Josh Prohibition, Joe would soon assume the head booker position, a spot he would hold for six years, all the while maintaining his jobs as commentator and website writer. The company grew from a struggling upstart with little money to speak of, to a widely-watched popular television outfit with international television & DVD distribution, live internet-Pay-Per-Views, and an amazingly talented young roster, a high percentage of which moved on to bigger and better things in the years to come.

After many productive years, PWO (now re-named PRIME Wrestling) took a turn for the decline. The sale of SportsTime Ohio to Fox Sports Network (and their corporate requirements that came with it) coupled with a series of internal financial, professional, personal, and legal issues took their toll on the company’s team, and left Dombrowski tired and burnt out. The tough decision was made to end the run of the organization, going out on top with a critically-acclaimed live-iPPV event “Wrestllelution 6: Art of War” on October 20, 2013.

In early-2010, Dombrowski received his biggest opportunity to date when he was hired by Adam Pearce & Cary Silkin to become the newest ROH commentator on Ring of Honor’s DVD releases & occasional live iPPV events. Joe’s voice appeared on nearly every event over the next nine months, working alongside respected names like Dave Prazak, Kevin Kelly, and Jim Cornette. Internal restructuring led to ROH choosing to streamline their announce team, and the company & Joe parted ways on good terms that fall. Joe remained a part of the ROH extended family, returning to do occasional work for the company in the years since, most notably “ROH Relentless” in May of 2013 in Richmond, VA, (hosted by Joe & Steve Corino) which ended up airing as an episode of “Road Rage” on ROH TV on over 50 television stations across the country. Joe continued to make occasional appearances on live events until late 2017, when he was brought back regularly as the host of ROH’s weekly “Future of Honor Friday” series on ROHwrestling.com and social media, spotlighting some of the brightest stars-in-the-making. Dombrowski continued to hold the play-by-play chair on “Future of Honor” (and occasionally on “Women of Honor Wednesdays” as well) until 2020.

Starting in 2013, Joe has begun exploring opportunities as a DVD/Digital content producer. His debut title, “The Montreal Theory” was a perfect way to kick-off the endeavor. A five-plus hour documentary/shoot interview/expose, the “Theory” debates the possibility that Bret Hart & Vince McMahon may have secretly been working together to conspire the infamous “Montreal Screwjob” in November of 1997. The film featured new interviews with men like Kevin Kelly, Steve Corino, and Raven, as well as archival footage of interviews with Shawn Michaels, Jerry Lawler, Kevin Nash, and many others. The DVD became a huge seller, and received coverage from numerous media outlets, and was mentioned by everyone from Bleacher Report, to Bret’s ex-wife, to even WWE.com. Joe has followed this up with “Refereeing 101”, a teaching seminar for pro wrestling referees hosted by WWE veteran Jimmy Korderas. In 2015, “The Legend of Virgil & His Traveling Merchandise Table”, a satirical expose into the former WWF star’s less than stellar reputation, was released on DVD & Digital and, with the exception of Montreal Theory, has been Joe’s most successful original release by far. Other releases, such as “AJ Styles: The Missing Matches”, “Hardcore Legacy”, and the “PRIME Cuts” series continue to do strong numbers as well, and several projects are already being conceived for the months ahead.

In 2016, Joe returned to regularly booking & producing live events under two new brands – “Premier Championship Wrestling”, an updated homage to the PWO/PRIME brand, with a new roster and the same dedication to heart, emotion, personality and story, as well as “Welterweight Wrestling”, a new take on the smaller, faster athletes of the genre, with a weight limit reduced to 185 lbs, lower than their cruiserweight counterparts. Between the two brands, well over 100 hours of new content has been produced, available worldwide.

In 2020, Joe officially moved on from Ring of Honor to pursue an opportunity as one of the main voices of Major League Wrestling’s “MLW Fusion” TV broadcasts, alongside Rich Bocchini & later Matt Striker. Joe also began branching out internationally once again, as one of the lead English-language voices of Mexico’s largest wrestling promotion, AAA, most notably their annual “TripleMania” supershows, often held in front of crowds in excess of 15,000 fans, and also working in the Middle East for Qatar Pro Wrestling in early-2020. He continues to devote much of his time to MLW and AAA broadcasts to this day. Perhaps the biggest-scale event of his career took place in July 2022 as Joe served as a guest commentator for the MLW & AAA showcase matches on the “Ric Fair’s Last Match” PPV special. Broadcasting alongside Tony Schiavone & David Crockett on a recreation of the old WTBS set, it was truly a surreal experience at an event overflowing with talent and special guests.

Joe’s passion of uncovering lost, hidden, or missing footage and making it available to the masses has come to the forefront in recent years, as he teamed up with Les Thatcher & Brian Pillman Jr. to produce the first official DVD & Digital release EVER of the historic “Brian Pillman Memorial Shows” from 1998-2001, far and away the top seller in the history of our umbrella of titles. Les & Joe also uncovered unreleased footage from Les’ HWA (Heartland Wrestling Association) from when it served as a WWF developmental territory, most of which was never meant for the public eye, and there are other similar projects from other time periods and areas in the works already!

Joe currently juggles his jobs as play-by-play commentator, content producer, and merchandiser (selling both original releases as well as rare hard-to-find old-school figures, magazines, and other collectibles), constantly searching for the next fun opportunity and next chapter to the on-going story of his career.