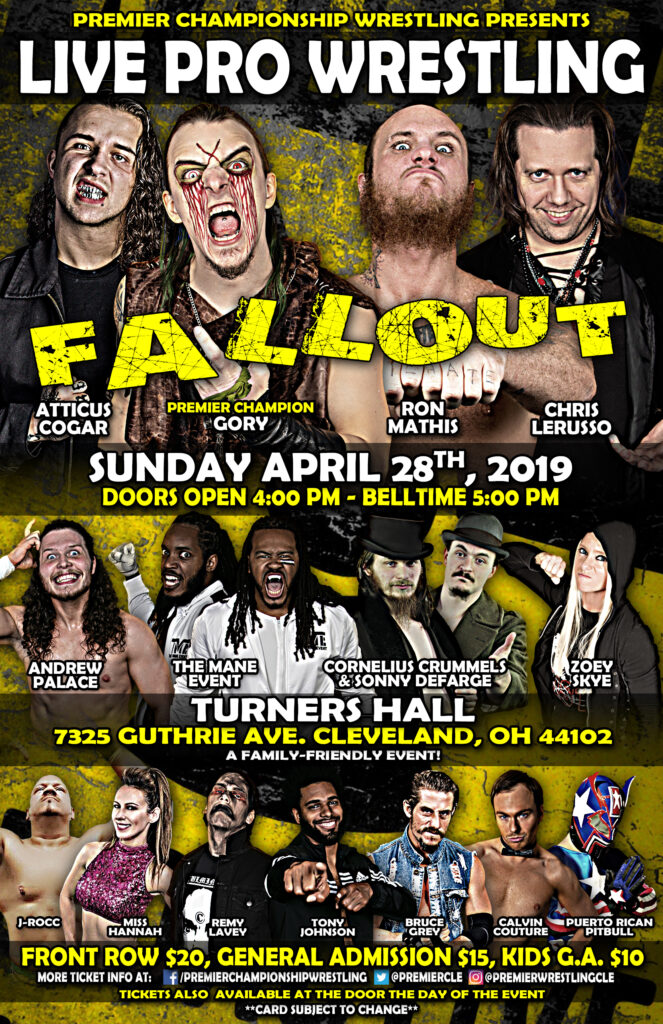 The stakes in Premier Championship Wrestling have never been greater, and with all of the explosive action, there is poised to be an equally devastating reaction. Get ready to watch your favorite stars aim to survive the treacherous fallout!

Sless Taylor beat Bruce Grey. After the bout, Bruce spoke about his hatred of present-day wrestling and wrestling fans, and claimed Sless wasn’t a true wrestler.

J-Rocc (w/ Dave Kich) defeated Phillip Archer. After the match, J-Rocc stated he felt it was a disgrace someone of his stature shared the ring with a “rookie” and claimed he was the best in Premier, even going as far as to say The Culmination is wrong for calling this their turf, as J-Rocc is the true King of Cleveland. This brought out Premier Champion Jason Gory to confront J-Rocc, but he never made it to the ring, as Ron Mathis attacked Gory from behind.

Chris LeRusso beat Atticus Cogar via disqualification to earn a future Premier Title match. It appeared Cogar had won via submission, as called by a second referee, until the first referee had overruled the call, due to Cogar striking him moments earlier. Cogar had struck the official after being blindsided by Tony Johnson, perhaps believing the official to be Johnson or another member of LeRusso’s Court, perhaps simply losing his temper.

Zoey Skye beat Miss Hannah in a No Disqualification match.

Premier Championship Wrestling returns on Sunday, May 19 for “Crossfire” with a special early start time of 4pm!